Sewing My Life Together

My Town, My City, My Sport, My Boston 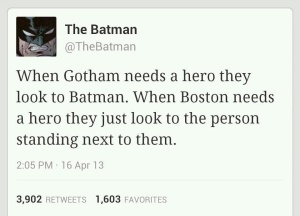 We returned from our weekend trip on Monday, April 15 at about 3 PM. As I got out of the car, I looked at my FB posts on my phone and saw something odd….people were posting about a bomb at the Marathon? Weird…obviously a hoax of some sort.

I am a former marathoner. Actually, I am probably a former runner, having chosen to bike and swim instead, although I am considering training for a 10K in October. Living my 20’s and 30’s and 40’s with runners of all types, we pay attention to the Marathon. We want to know who wins, in which place the first American came in (and remember, we watched through the years when the winner was Boston Billy, BIll Rodgers, our local hero. (and father of a college classmate of EC’s, Elyse)….How I longed some day to run Boston! I never did train for it because the dark and icy days and nights make it really hard to do those long runs when you work.

And this week I have been taking bike rides as I being to train for a 50-miler in early August, to support the PanMass Challenge, a fund-raiser for cancer. And after my bike rides, there’s more TV, newspaper reports, and radio to listen to about the bombing.

And I found out the son of a local guy who was a guidance counselor at our high school lost one of his legs in the explosion, and his wife was also seriously injured. There’s a web page for donations for Patrick and Jess, his wife…

http://www.giveforward.com/fundraiser/ygf1/helpforpatandjess?utm_source=facebook&utm_medium=fb_share_stream.share&utm_campaign=receipt_T1&fb_ref=908265
So strange that the very people who were watching a road race ended up with injuries that involve losing lower limbs…..

So most of this week I was focused on the news coverage. This afternoon, I actually sat down at my machine and moved forward with some  silly TV and making cards. Soothing. Calming. Healing.

18 Apr This entry was published on April 18, 2013 at 11:04 pm and is filed under Cards, Interests, Running, Uncategorized. Bookmark the permalink. Follow any comments here with the RSS feed for this post.

One thought on “My Town, My City, My Sport, My Boston”